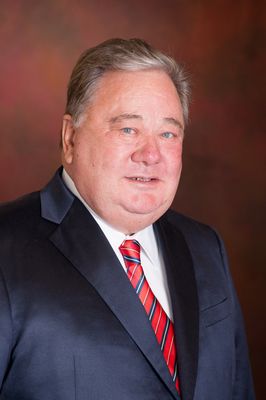 When Rocky was born, his mother was 16 and his father was 18.  His parents had been married two years and living in an old one-bedroom farmhouse in Brazos Point, Texas.  The house had a fireplace, electricity and water, but no indoor restroom.  Rocky’s parents, grandparents and great-grandparents were farmers who raised cotton, peanuts and cattle and were grateful for what they had.  Both his father and mother dropped out of high school to help on the family farm.

When Rocky was two years old and his mother was expecting Rocky’s brother, the family moved to a two-bedroom house in Cleburne, Texas, shaded by large pecan trees.  The house had an indoor restroom, electricity and evaporative coolers.

When Rocky attended school for the first time, his first grade teacher, Ms. Cowan, informed him that his name was not Rocky.  It was Roger.  Rocky had no idea and had never been called Roger.  That is what his classmates called him until they got to know his neighborhood friends.

Rocky’s father started commuting to Fort Worth where he operated heavy equipment for an excavation company. Rocky's father was a smart, hard-working, honest man with high integrity.

Rocky had a wonderful childhood in Cleburne.  He played pitcher in Little League and was a Boy Scout.  He mowed lawns and sold bags of homegrown pecans to the neighborhood for extra money.  He loved being out in public and dealing with people.  He also enjoyed frequently visiting his grandparents, eight aunts and uncles and eight cousins who lived in Cleburne.

After living in Cleburne until he was 12 years old, Rocky's family moved to Fort Worth so his father could attend “business college.” Rocky took guitar lessons and it quickly became his passion.  He started teaching guitar when he was 14.  He continued teaching through high school and college and had up to 120 students each week.  He also made money playing in the rock and roll band, The Intruders.

After reading his dad’s Business Law book, Rocky became interested in law.  When he was in the 10th grade, he explained to a speech class presentation why he wanted to become a lawyer and politician.  He also proudly told his friends and relatives.  His paternal grandfather tried to give Rocky a dose of reality when at the family dinner table he said, “Rocky, you will never make a lawyer.”  That just made Rocky even more determined. At that time, people living in the country typically quit school to work on the family farm.  Then they would get married and start having a family.  Getting an education was not a priority if you lived in the country.

Rocky was the first person on either side of his family to graduate from high school.  His family was not financially able to help with college expenses, so Rocky worked his way through college.  He married Sharon when they were 19, and she dropped out of college to go to work.  With her income, Rocky’s income and student loans, Rocky was able to pay for law school. Rocky always paid his way through high school, college and law school.  He never asked for or received any financial assistance from his family at any time.

Rocky received his Bachelor of Business Administration degree from the University of Texas at Arlington, Juris Doctor (J.D.) from St. Mary's Law School and Master of Law degree (LL.M.) from Southern Methodist University Law School. 1n 1994 Rocky went through the rigorous procedure to become a board-certified specialist in personal injury trial law.  Less than 3% of Texas Attorneys are board-certified in this area.  It is the most prestigious credential a personal injury attorney can have.

Rocky loves helping people fight huge insurance companies.  He likes securing justice for his deserving clients.  He plans to do this as long as he can do a good job for his clients.

Since 1995, Roger "Rocky" Walton has been a board-certified specialist in the area of Personal Injury Trial Law by the Texas Board of Legal Specialization. Only 2.2% of Texas attorneys are certified in this area. To be board certified in the program created and sponsored by the Supreme Court of Texas, Attorneys are required to demonstrate special competence by passing rigorous requirements pertaining to character, legal knowledge, and experience. Attorneys must also receive the approval of judges and their peers.

Rocky Walton, and the Law Firm of Roger "Rocky" Walton, P.C., are rated AV. This is the highest rating assigned by Martindale-Hubble, which is "very high to preeminent." According to that company, the AV rating "Shows that a lawyer has reached the height of professional excellence. He or she has usually practiced law for many years, and is recognized for the highest levels of skill and integrity." Martindale-Hubble is the leading authoritative resource for information on the worldwide legal profession.

Rocky has dedicated over 30 years of personal injury trial law practice to the cause of winning compensation for the victims of wrongdoers. This compensation helps restore the independence and dignity of his clients and their families, while holding wrongdoers responsible for their negligent conduct. As a negotiator and litigator, Rocky is often innovative, calling on his years of experience, propensity for extensive research and his ability to find and use remote theories of law. Through jury verdicts and settlements, his firm commands the respect of many insurance companies and their attorneys throughout the state.

For many years, Rocky Walton has been a member of the State Bar College of Texas. The purpose of this organization is to recognize lawyers who maintain and enhance their professional skills and the quality of their service to the public by significant voluntary participation in continuing legal education, at least double the amount required of lawyers.

A Top Attorney in Tarrant County

The Law Offices of Roger "Rocky" Walton embody the spirit and principles of the man who is an advocate for the people in both his legal and personal endeavors. Rocky Walton fights as passionately and as thoroughly for his legal clients as he did for the Arlington residents he represented for two terms on the City Council during the 1990's.  Legal and political foes alike have termed him "tenacious, diligent, well prepared and hard working." Mr. Walton believes in giving back to his community and in addition to serving on the City Council, spent 3-1/2 years on the Arlington Planning an Zoning Commission. Included in his many civic honors is the American Heart Association' s Legislator of the Year award. 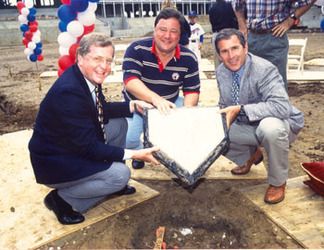 Rocky Walton (center), of Arlington City Council and Arlington Sports Development Authority, with Tom Scheifer (left), Texas Rangers General Manager, and George Bush (right), Managing Partner of Texas Rangers. This was the ceremony when the home plate of Arlington Stadium was moved to the new Ballpark in Arlington.

Rocky lived in Cleburne until the age 12, when his family moved to Fort Worth so his father could attend business school. Rocky was taking lessons on the steel guitar and standard guitar and began teaching guitar lessons by age 15. Rocky taught guitar lessons to children and adults while he was attending high school and college, much of the time having over 100 students each week. During high school, Rocky also played guitar for a teen rock and roll band called "The Intruders." They played at teen parties and venues.

When Rocky was in the tenth grade he read his father's Business Law book and loved it. That year he announced to his speech class during a presentation that he would become a lawyer and politician, which later came true.